Chopra and Hameroff on Quantum Consciousness 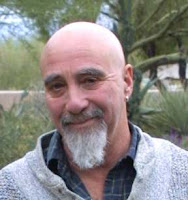 I got this from the always-enriching Nonduality Blog. Deepak Chopra interviews Stuart Hameroff M.D., Professor Emeritus at the Departments of Anesthesiology and Psychology, and Director of the Center for Consciousness Studies, at the University of Arizona. Here's a short excerpt:

"I don't necessarily ascribe to any particular religion, but I think through quantum physics, three essential components of spirituality can have a plausible scientific explanation. Namely, these are first, interconnectedness among living beings via quantum entanglement. Second is guidance by Platonic wisdom. Penrose also embedded Platonic values in spacetime geometry which can guide our actions, and be viewed as following the way of the Tao, or divine guidance, or whatever you want to call it. And finally, even conceivably the possibility of afterlife or consciousness outside of the body. Because if consciousness is happening in the spacetime geometry, normally in the brain, then when the blood, oxygen and metabolic energy stop driving the classical auto-pilot activity, the quantum information extending to spacetime isn't destroyed, but can perhaps leak out or dissipate in a more holographic distribution, but remained entangled. So it's possible that a soul could exist afterwards in Planck scale geometry. There could be reincarnation. I don't have any proof, and I'm not saying this necessarily happens, but if it does, here is a plausible scientific explanation."

The interview is long and covers a lot of territory, but is not hard reading. Find it here on SFGate.
Posted by Brent Robison at 12:41 PM