The following is a re-post of my blog entry from January on the Hudson Valley Writers networking site:
---------

I just re-read an article that I had decided on my first reading was very important for my writing, then promptly forgot about. "Ready-made rebellion: The empty tropes of transgressive fiction," by Jonathan Dee, appeared in Harper's in April 2005 and can be found here: http://harpers.org/archive/2005/04/0080507.

Be forewarned: if you're a fan of Neil Labute, A.M. Homes, Will Self, Chuck Palahniuk, or Dennis Cooper, they don't go unscathed here (especially LaBute). But fanhood should always be open to challenge anyway, don't you think?

Dee opens with these statements: "Good fiction has never been about moral instruction; it would be much easier to write if it were. Its more imposing task is to do justice to the inexhaustible complexity of human motivation." He goes on to say that we look to writers to tell us why people act the way they act. The challenge in that statement, of course, is that the writer must have some self-understanding in order to illuminate his characters. So the journey toward self-awareness, perhaps the most important journey any of us makes, is crucial not only for life, but for fiction. This became most clear to me when I was in a therapy group led by the late Mark Abramson, whose firm, even cantankerous insistence upon clarity and honesty of thought and expression was not only an invaluable and loving aid in emotional growth, but became a rigorous training ground for my writing as well.

But I'm often easily confused by what goes on in the marketplace; new work getting praised as hip and edgy might make me question what I'm doing. Or, worse yet, its influences might creep into my work past my internal literary gatekeeper, who sometimes sleeps.

I'm grateful to Dee for helping make clear my muddy instincts when he writes, "Books that depend for their sense of opposition on the straw man of a presupposed bourgeois mentality outside the fiction itself--on shock value, in other words--are working in conditions of profound safety disguised as risk. The characters suffer no repercussions (nor do the writers, for that matter, regardless of outlaw posturing), but the atmosphere is one of self-conscious edginess and aesthetic daring."

I don't want to be that type of writer. I'm not entirely confident that I haven't slipped into some of the methods he decries, even in stories now "finished" and on the market. But I am hereby re-dedicating myself to being vigilant against shallow posing, to exploring my characters from the inside rather than judging them from outside while pretending objectivity. And to continuing my own inner exploration, because, whether I'm writing or not, that's what I need. I believe in Dee's final declaration: "Artist, diagnose thyself."
Posted by Brent Robison at 1:21 PM No comments: 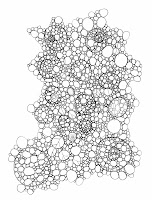 Do, don't, do, don't. For a year I've been afflicted with severe indecision: chase down a small press who'll publish my (clearly non-commercial) collection of stories, or join the Do-It-Yourself revolution and get my book out to the public all on my own. I respect artists like my wife who take their work to the marketplace as independent creator/entrepeneurs. But at the same time, I admit my ego-based (sometimes revoltingly desperate) desire to be validated by an editorial gatekeeper of even the smallest stature.

Besides being a writer, I'm also a tiny DIY publisher of, among other things, a regional literary journal (http://blissplotpress.com/). So I know that fine literary quality is certainly to be found outside the gates of the publishing establishment, even when that establishment is defined liberally. And I know how to build a book, get it printed, even get it into the marketplace.

But still, I've been resistant to joining the ranks of self-publishers. I had hoped it would be very clear that someone other than myself thinks my work is good. We all need a little respect, right?

But "good" does not mean "commercial" and publishers have bills to pay, a bigger problem now than ever. Besides, I'm just too impatient to persevere, plodding along at the snail's-pace submission/rejection game.

And so it goes: I decide to self-publish, then I flip-flop, and flip-flop again.

The submission history of my story collection goes like this:
1. Four contests... no awards
2. A publishing contract offer from a small press who, when I suggested minimal adjustments to their terrible contract, withdrew their offer, no discussion.
3. Interest from a respectable small press, but I decided not to pursue it further because they've gone to Print-On-Demand only, which I felt I could do just as well by myself.
4. Query to an agent referred by a friend... politely declined.
5. Months wasted when one small but reputable press cashed my reading fee check, then lost my submission. No answers to several inquiries... but eventually they refunded the money.
6. Queries to five small publishers... three declined, one no answer despite follow-ups, one response still pending... but since eight months have now passed without an answer to my query, I just sent them a note withdrawing it.

So... fnally... the decision is made. I have begun the process to self-publish my collection, The Principle of Ultimate Indivisibility. I've decided that a baker's dozen submissions is enough; if 13 wasn't my lucky number, then I'm taking luck into my own hands. The final nudge came from this simple but very helpful website: http://www.selfpublishingreview.com/, whose About page says, "The aim of this site is to legitimize self-publishing – not just as a fallback plan, but as an avenue that’s increasingly necessary and useful in a competitive publishing industry. If the site has a manifesto it is to improve the culture around self-publishing."

So along with bearing the burden and reaping the rewards of total independence, I'm helping lay a foundation for a radically different future in the world of publishing. Viva la revolution!
Posted by Brent Robison at 9:12 PM 9 comments: