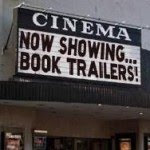 While my two novels-in-progress lie fallow and my subconscious chews on them, I’ve found myself drawn back to more visual forms of self-expression. The lion’s share of my work life has been in the field of video production, after getting a film degree and aspiring to make movies -- the serious artsy drama kind. Also, I was a photographer before I was a writer, and before that I loved to draw -- which often took the form of narrative, as in comics and storyboards.

So I’m feeling fortunate these days to be able to connect my literary and visual interests by making short video commercials for books: “book trailers” as they’re called. I started with a very short one (meant to be the first of several) for my own book, The Principle of Ultimate Indivisibility (see this new review). Watch the video here: http://blissplotpress.com/indivisibility.html.

I just finished this 2-minute trailer for a new novel published by a small press in Maryland, Atticus Books:
(Go to YouTube to see it bigger: http://www.youtube.com/watch?v=NdQcgJhRHsw)

It seems that book trailers are rapidly becoming a required weapon in the book marketer’s arsenal. But do they really work? Do you watch them? Do you seek them out? Do you feel influenced to take a closer look at the book, or even buy it? Do they ever have the opposite effect? Do you resist the whole idea?

What do you think? I’d love to hear your thoughts.
Posted by Brent Robison at 11:13 AM No comments:

In 1392, in the famous Canterbury Tales, Geoffrey Chaucer named a date that we can interpret as the 32nd of March, or April 1. Set on that day was the "Nun’s Priest’s Tale," in which (in a story within a story within a story), the Chanticleer (a rooster) and the Fox are each fooled by the other. That was the earliest recorded association between the first of April and foolishness.

For the animals in Chaucer’s fable, vanity and pride were their undoing. For the humans in my story collection, The Principle of Ultimate Indivisibility, there are other ways of being foolish.

Harold, who appears in several of the stories, is perpetually bewildered about why his life feels broken and his marriages crumble. His self-image as a family man does not match apparent reality. He has buried his grief and guilt over his brother’s death.

Sid doesn’t like to face any big questions. He wants a God who is an office manager, with easy answers. He’s happy when things are simple, but having a son in a coma does not fit that picture.

Marv may be the holiest fool in the book, a plumber who dreams of popcorn farming. He’s frequently clueless but has occasional inadvertent flashes of real wisdom. Too bad it’s so difficult for him to communicate them, even to his friend Sid. Marv is introduced in this little sketch from the story "This Handful of Pebbles":

When Marv's girlfriend Polly told him he needed to get his finances in order, he went out that very afternoon and bought a money clip. Shiny brass with cherrywood inlay.

It didn't work; she left him anyway. But it wasn't because of his disorderly finances. It was because of his distinct lack of gift-wrapping talent. At every holiday that demanded paper-and-ribbon dexterity, his appalling ineptitude became more clear. “I can't bear this, TM.” she said on Christmas morning. “I have to go.” After two years of living together, she moved out on New Year's Day.

Polly is the only person who ever called Marv “TM,” and it has always rung in his ears with a faint derision, especially now, when during each of their frequent phone conversations, she hints at the presence of other men in her life. He finds himself able to shrug off those oblique references, but the repeated “TM” digs at him like a claw.

Marv is a plumber. Naturally, he does not tell the guys at the supply house that at night, sometimes he weeps.

When Marv carefully makes out an estimate for a client, in triplicate, his official signature reads “T. Marvin Felch.” His first name, Tender, he keeps strictly to himself.


As I look objectively at my own work, I find it interesting that none of my female characters qualify as fools. Or maybe that’s a facile generalization. There are at least a couple of women in the stories who are less than exemplary. Still, it would appear that in my view, the women are the wise ones. So there's something I need to look at: my streak of self-deprecatory sexism.

Also, I’ve written many other male characters who make bad decisions but cannot be called fools. They might be young and wild, old and tired, alcoholic, lonely, self-deluded in some way, but they have just enough of their wits about them to escape foolishness. With Harold, Sid, and Marv, I have an authorial relationship that is subtly different, especially when I’m telling their stories in the third person. They lead me by their own unconsciousness toward intuitive lessons. They are the blind leading the blind, where walking in darkness is precisely what is needed.

The Holy Fool is an archetype in every culture. Sometimes a savior (St. Francis), sometimes a clown (Coyote), sometimes a nasty killer (The Joker), he is usually portrayed as behaving outside the bounds of “normal” society. His rule-breaking opens gateways to deeper truths that the culture needs. He is both a bad child and a tool in the hands of a God who might be loving, or might not.

My fools are different: their behavior is not outrageous, but they are still instruments in the hands of the Author, me, to open doors. I can’t say how readers will feel, or what they might learn. But for me, Harold, Sid, and Marv are friends for whom I feel a little pity and a lot of fondness. They are boys, not men, and they need my love. They embody my own inner fool, who teaches me how to be wise.
Posted by Brent Robison at 1:13 PM No comments: