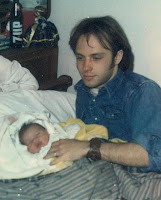 I must tell my story / I must drop my story. I love this perfect nondual paradox, and in its precarious balance is where I live every day.
Posted by Brent Robison at 9:19 PM 5 comments: