A Writer Wrestling with Unity 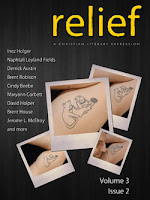 Back in December a shortened version of my story "Baptism" was published in a literary journal called RELIEF: A Quarterly Christian Expression. The Christian Right has rubbed me so far the wrong way (I mean, really far) that I had felt real misgivings about submitting the story to this journal. On the other hand, they seemed relatively open-minded ("Christian writing unbound" is their slogan), and I felt my story about a Mormon boy and his adopted Navajo brother had some truth to speak to such an audience, so I sent it anyway.

It felt good to see the story in print (besides in my book), and the editor subsequently invited me to write a guest post for their blog. Again I felt reticent at first (my ego: I don't want people thinking I'm Christian!), but I enjoyed recapping how my journey toward publication of my book coincided with my entry into nonduality philosophy. And now I see how the blog's title, A Writer Wrestling with Unity, has another meaning as well: I'm confronting my own resistance to inclusivity, to embracing the "other," even as I learn the truth of our oneness.

The guest blog appeared in February. I hope you'll read it:
http://www.reliefjournal.com/2010/02/27/a-writer-wrestling-with-unity/
Posted by Brent Robison at 2:00 PM 1 comment:

A month ago, a Big Scary Snowstorm forced the rescheduling (to now: Spring!) of a reading event that I'm very pleased to be part of, with Gail Godwin, John Bowers, and Heather Rolland (details below). I'll be reading from my story collection The Principle of Ultimate Indivisibility (see links to reviews on the right). Since one of the themes of my book is the interconnections among people and the subtle influences exerted by those invisible circuits, I've been thinking about the other three readers with whom I'll be sharing the stage....

I'm especially humbled to be on the same program with Gail Godwin. She's a literary celebrity, with three National Book Award nominations, a Guggenheim Fellowship, National Endowment for the Arts grants, the Award in Literature from the American Academy and Institute of Arts and Letters, and five novels on the New York Times best seller list. Although we both live in Woodstock, I met Gail only once, briefly. It was May, 2002, and she was attending the launch party of my publishing project, Prima Materia, a literary annual for Hudson Valley writers. She was the guest of one of the contributors to that first issue, Djelloul Marbrook (insightful blogger, fine fiction writer, prize-winning poet), and his wife Marilyn, who have since become dear friends of mine. Gail was raised in Asheville, North Carolina, a place where I was once very pleased to discover a delightfully countercultural health food store, a bright spot on a long, dreary journey along the corporate treadmill of the interstate.

I've never met John Bowers, but chances are good we've seen each other. He lives in Phoenicia, NY, a quaint/funky village that is the home of many of my friends, my daughter's school, and frequent breakfasts, lunches, and gallery strolls by my wife and I. John is also a literary star, with seven published books, many articles and essays, and twenty years as a writing professor at Columbia University. I found myself in his home town, Johnson City, Tennessee, just last month. It was a welcome stopping point on a dark wintry night after twelve hours of driving, heading home from New Orleans. Wendy and I were even able to have a good Indian meal and a glass of wine, not our usual highway fare.

Heather Rolland and I share a number of friends on Facebook (that feeble simulacrum of the Net of Indra) and she's a member of the networking website I started, Hudson Valley Writers. I was aware of her first novel, and knew that she and I could probably talk shop about the experience of independent publishing. We had only that strange, disembodied cyber-connection, like electronic eavesdropping, that is today's version of "friendship," until she attended my reading/booksigning event last Fall. I enjoyed meeting her and her husband and daughter, but was too busy signing books to chat at length, so even though we've met in person and live in neighboring towns, the connection is still mostly in cyberspace. I look forward to hearing her read.

This event is an example of what I love about the Hudson Valley, and in particular, our northern Ulster County corner of it: the creative talent that bubbles up out of these woods and small towns is amazing. There must be something in the water.

Arrive early, order coffee, browse books, chat with the authors. Hope to see you there!
Posted by Brent Robison at 12:32 PM No comments:

Driving to work, I heard the old Joni Mitchell song, "For Free," in which she compares herself to a street musician:

I slept last night in a good hotel / I went shopping today for jewels / The wind rushed around in the dirty town / And the children let out from the schools / I was standing on a noisy corner / Waiting for the walking green / Across the street he stood / And he played real good / On his clarinet, for free

Now me I play for fortunes / And those velvet curtain calls / I've got a black limousine / And two gentlemen / Escorting me to the halls / And I play if you have the money / Or if you're a friend to me / But the one man band / By the quick lunch stand / He was playing real good, for free

Nobody stopped to hear him / Though he played so sweet and high / They knew he had never / Been on their TV / So they passed his music by / I meant to go over and ask for a song / Maybe put on a harmony... / I heard his refrain / As the signal changed / He was playing real good, for free

It reminded me of the street musicians I always encounter on my annual Mardi Gras trip to New Orleans -- some very talented, some not so much, all nobodies struggling for a buck.

Or not. Because it also reminded me of the experiment conducted by the Washington Post in January 2007, in which world-acclaimed virtuoso violinist Joshua Bell, incognito, played masterpieces on a Stradivarius for 45 minutes in a Washington metro station during the morning commute. Of 1,097 passersby, only 7 stopped to listen at length. Most ignored him entirely. Donations totalled $32, although on the previous night Bell had played a concert where seats sold for $100.

I'm not commenting on the rat race or cultural ignorance or mercenary urges, nor am I pondering the meaning of context, "art without a frame," etc. Instead, I'm thinking about the role each of us plays in the drama of life... how we were chosen for the part, how well we perform despite the payback or lack thereof, how graciously we accept the role we've been given.

In my view, fame and fortune are not earned. Neither intensity of labor nor quality of work has a cause-effect relationship to worldly rewards. Some folks have been selected to be stars; others have not. The universe has birthed everything we see to be exactly as it is. Nothing can be otherwise. If a droplet in the ocean were sentient, it might easily convince itself that it is a powerful free agent whose own decisions make it go this way and that, up and down, here and there, without ever being aware of the ocean's vast currents at work underneath its every move. While human free will itself may not be an illusion, its consequences are. When someone lifts himself by his own bootstraps, it's because he's playing the "Bootstrap Guy" in the script. He deserves praise for his sweat, but that does not mean it actually caused his success.

"He was playing real good, for free..." Joni saw that she and the street clarinetist were equals, just performing on different stages, and being rewarded differently. The unfortunate fact is that too many people didn't listen because "They knew he had never / Been on their TV." If Joshua Bell had been a more familiar face from pop culture, more people would have paid attention. To them, fame equals value... consensus is more important than personal perception... nothing not already known is worth knowing.

In the literary arena, there are blockbuster author-celebrities, hardworking genre craftspeople, fringe-dwelling creatives, and an ever-growing mob of scrambling self-published storytellers and poets with skills from the ridiculous to the sublime. I'm among that latter group. Apparently my role is not to be a big-selling author but to be an independent artist, and my responsibility is stay true to myself, do the best work I can, and let go of the results.

It's not always easy to duck the missiles of "fame equals value." Invisibility hurts; not so much when it's "me" who's invisible, but rather when it's my work -- work that I know is good -- that's ignored. Ignored because I have no "platform" -- that is, fame. One of the ever-more-prominent protocols in self-publishing is to give away one's work in e-book format as a way to jump-start a following. In other words, to be that street-corner clarinetist, playing real good, for free. I've had very mixed feelings about that.

This discussion intersects with the always lucid thoughts of Mark Barrett on Ditchwalk.com. His March 1 post called "Doctorow, Anderson and Godin, Oh My" shines an Emperor's New Clothes light on the "free content" movement. I'm with Barrett: I don't want to be part of the trend toward celebrity as a measure of value. I say let celebrities play their celebrity roles; I'll play my writer role, thank you very much. However it works out, that's how it works out. And I lean toward Barrett's (old-fashioned) ideas that professionalism can be indicated by price (see his March 2 post as well as others about "platform").

Trouble is, I had already put my book in digital form on Smashwords.com with the tag, "You set the price!" Then, after looking at it there in the various e-book formats, I felt so disgusted by the utter lack of design or formatting consistency that I did nothing to let the world know. This is not what I ever wanted my book to look like. Sure, the stories are really my work, not the page design. But no, for me it's more than that -- if it's not a beautiful object, I'd rather not have my name on it. Current conventional wisdom would suggest that I'm cutting my own throat with this attitude. Maybe I'll change; time will tell.

Eckhart Tolle tells me to ask myself, "Can I be the space for this?" Part of what that means to me is, to follow Byron Katie's presciption, "loving what is." Opening my arms to welcome the actual... breathing... knowing that in this moment, all is well... not resisting my emotions, my intuitions, the whispers of truth from the world. These positions all of us hold in the heirarchy of this dreamscape, these roles we are playing in the drama, they are exactly the right roles. For free or not, let's play them the best we can.
Posted by Brent Robison at 8:47 PM 2 comments: