Djelloul Marbrook’s fiction is like no one else’s. Perhaps it’s the rich stew of being half-Bedouin, half German-American, born in Algiers, raised in New York’s art world, educated in a Brit-run boarding school, helped by a Sicilian stepfather, then going on to a stint in the US Navy, a newspaper career, years living on a sailboat, and a classic ten-thousand hours of poetic practice—all those ingredients and other less visible ones—that worked an alchemical magic on his sensibilities and vocabulary.

Full disclosure: Djelloul is a dear friend of mine. I don’t always love his work, but I always respect its powerfully idiosyncratic intelligence.

Mean Bastards Making Nice is a slim volume from small UK publisher Leaky Boot Press. It contains two novellas related by theme and setting. It’s a thoroughly New York book, but that doesn’t mean stock Big Apple accents or tired tropes from TV. It means both city streets and upstate forests are simply there: as integral as the air the characters breathe.

To gloss the surface: “Book One: The Pain of Wearing Our Faces” introduces a painter, a composer, their shared alcoholism, and a mysterious woman who is a muse for both of them, but a dangerous one. “Book Two: Grace” follows a girl on the run from country to city, her discovery of her own warrior strength on the streets, and her profound impact on a few of the city’s art-world glitterati.

However, for a Djelloul Marbrook story, a plot description cannot begin to capture the actual reading experience. Nor can a mention of the astonishing lexicon he employs. Instead, it has to be acknowledged that the journey a reader takes between these covers is primarily a journey into the author’s mind. His voice is profoundly subjective.

Which is certainly not to say Marbrook only writes as Marbrook. Each of these novellas is about a woman, and one is narrated in first person. Both women are painters. Marbrook is neither a woman nor a painter, but the masks he creates are so vivid they transcend categories. The sensibility that drives the storytelling, that crafts the sentences, is recognizably a product of a singular author’s interior.

Granted, every writer’s narrative voice is subjective to some degree. It can’t be otherwise; at the level of everyday living, every human is a solo consciousness encapsulated inside a sensory apparatus. One point of view for each of us. But when we communicate, and especially when we use the consensual abstraction of written language (music and visual art not so much), we are moving into a zone of commonality, a dilution of our lone uniqueness. Writers, whether they know it or not, are embracing that dilution—especially those content to work with a fairly limited database of words, the words they’re confident their readers will understand. That means most of us—but not all. 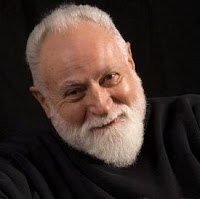 Marbrook, a seasoned, professional newsman, is skilled at prioritizing clear, communal message-sharing above personal, idiosyncratic expression—all the better for journalism, but his fiction is something else entirely. It shows a conscious choice to resist the diminishment of unique subjectivity. To, instead, master the tools of the art form—vocabulary, syntax, metaphor—until a distinctive, muscular, uninhibited (but never sloppy), even hallucinatory voice emerges, seemingly without effort.
This is prose that reminds me of film school: Russian cinema pioneer Sergei Eisenstein claimed that meaning in montage (editing) came from the “collision” of adjacent shots. Marbrook’s prose accrues its dense power from the continual collision of words, phrases, images, ideas.

In addition, Marbrook puts the lie to all those Internet writing sites that say a fiction author should be invisible so the story can come through without distraction. He proves the stupidity of that idea. What would art be if all artists made their expressive style invisible so the subject matter could be seen without distraction? Van Gogh would have been a photographer taking mundane snapshots.

As a reader, submerging yourself in these novellas is like being lost in some sort of fever dream, a foreign land that’s familiar but somehow off-kilter, a parallel universe, an impressionistic, almost psychedelic vision simultaneously more vivid and convoluted than your own. To choose a convenient example, the book begins with these lines:

I don’t trust words. That’s what he said. They’re swindlers, mean bastards making nice, he said.
I felt like swatting his words out of my head as I swarmed into Bloomie’s on Christmas Eve in full city roast. I needed gloves. I needed a new head. I’d left my rabbit-lined Danish gloves in a cab. The cheap wool mark-ups I bought made my two first-water rubies and clitoral opal itch. You don’t want to itch anywhere, but in Bloomie’s razzle of cut-glass perfume pumps and dazzle of capitalist excess itching is a criminal impulse. I gulped three Benadryl caplets with my own spit.
On a good day my sexual jewels are eyes for seeing in the dark, sensors to explore ocean floors, microscopes. On a bad day, they’re nails to bleed me on a cross, tear me apart. Today they itch and shine at trouble up ahead, like all good jewels. Isn’t it what they’re for? I’m an artist. I never know trouble in my head, it’s always somewhere else, tactile, fragrant, unwilling, unable to be put off. Why else would a woman want to be an artist?

You ask: Who speaks this way? Answer: Marbrook’s people.

You ask: What does it mean? What’s going on? Answer: I’ll re-read, and I’ll notice how I feel. And I’ll keep going, and I’ll observe the cumulative effect of this deluge of image and language, and viscerally, I’ll understand.

Marbrook is an award-winning poet. Perhaps a poet’s fiction is to be expected to deliver this sort of fierce subjectivity. Perhaps not. All this is to say: read him.

Here’s a video I’m pleased to have produced to promote the book: